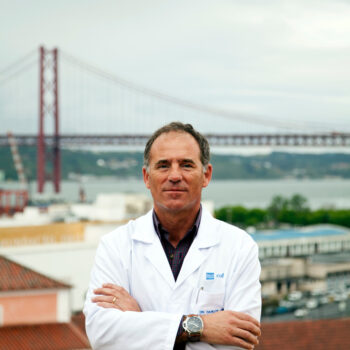 PRESENT SITUATION (since May 2016)

- 2007 – April 2016: Consultant General Surgeon at the Hospital da Luz – Lisbon, where he had the following positions:

- Performed the first robotic operation for General Surgery in Portugal

- Performed the first robotic gastric bypass in the Iberian Peninsula

- Directs and runs the highest volume robotic bariatric and metabolic surgery program in Europe, since 2010

- Overall, performed more than 3500 operations by laparoscopic or robotic surgery

- Since the early 2000s, with Prof. Jacques Himpens, pioneered some bariatric procedures

- Since 2005, joined Prof. Jacques Himpens (Director) in Dendermonde, Belgium; this center, with this two surgeons team, was at that time the busiest surgical obesity center in Europe.

- Performed more than 2500 of those operations, including around 1500 laparoscopic and 400 robotic Roux-en-Y gastric bypasses.

- Set up the Coloproctology Unit at the Hospital de S. Francisco Xavier, in Lisbon

- Set up the Colon Institute in Lisbon

- Set up the Coloproctology Outpatient Clinic in Hospital da Luz

- Invited faculty, as lecturer or moderator, in several national and international symposia and congresses.

- Invited to perform live surgery on a regular basis, in several international symposia and congresses. He performed two live robotic gastric bypass during the world International Federation for the Surgery of Obesity and Metabolic Diseases (IFSO) Congresses, held in Istanbul in 2013, and in Madrid in 2019.

- Several papers published, as author and co-author, in international journals.

- Consultant for Medtronic on robotic surgery, and member of the Medtronic Robotic Colorectal Advisory Board