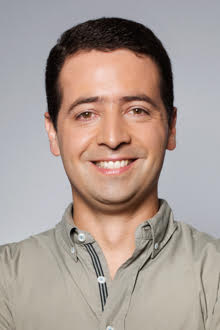 Nuno Barbosa-Morais graduated in Physics Engineering at Instituto Superior Técnico in 2000. He did his PhD in Biomedical Sciences in 2007 at the Lisbon Medical School with Maria Carmo-Fonseca, with most of the associated research actually taking place at the University of Cambridge with Samuel Aparicio. His PhD work involved bioinformatics studies on the complexity of splicing and gene expression and his efforts include studies on the evolution of splicing factors and the RNA binding of splicing factors.
Nuno Barbosa-Morais was a Research Associate in the Computational Biology Group from the University of Cambridge, led by Simon Tavaré and based at the CRUK Cambridge Research Institute, from 2006 to 2010 and a Senior Postdoctoral Fellow with Ben Blencowe at the University of Toronto from 2010 to 2013, being involved in the analysis of mRNA-seq data for the inference of tissue- and species-specific alternative splicing patterns. Nuno Barbosa-Morais was awarded a Postdoctoral Fellowship from the Canadian Institutes of Health Research and a Marie Curie International Outgoing Fellowship. From 2013 to 2015 he was an Honorary Senior Research Fellow at the Nuffield Department of Obstetrics and Gynaecology of the University of Oxford.
He established the Disease Transcriptomics research group at Instituto de Medicina Molecular in 2015 as an EMBO Installation and an FCT Investigator Grantee.