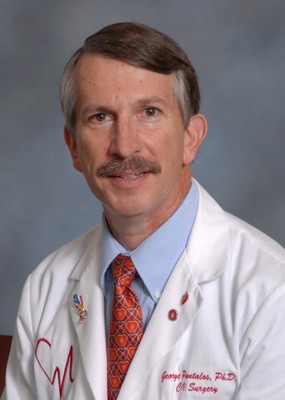 George Pantalos has been a cardiovascular explorer for over 47 years and a Professor of Cardiovascular and Thoracic Surgery and Biomedical Engineering at the University of Louisville, since July 2000, after holding similar appointments at the University of Utah for 17 years. His efforts have focused on understanding and treating heart failure with mechanical devices. George has also collaborated with NASA for many years helping to understand cardiovascular adaptation to the weightlessness of space flight and the return to Earth, having flown 45 research missions on the NASA parabolic flight aircraft and leading the development of a cardiovascular diastolic function experiment that flew twice on the Space Shuttle Discovery. Other reduced gravity research projects have included delivery of effective chest compressions for CPR and organ perfusion in 0-G, and the development of surgical capabilities for exploration space missions. For nearly 10 years, he has worked with students at the University of Louisville to convince the FDA to eliminate the restrictions on healthy, sexually active gay men from being blood donors.
Outside of his research, development, and public policy efforts, George enjoys traveling with his family, playing basketball and biking, being a weekend percussionist, volunteering with the American Red Cross, and making baklava. With his fellow students, staff, faculty, and patients, his motto has always been, “Share the adventure”.