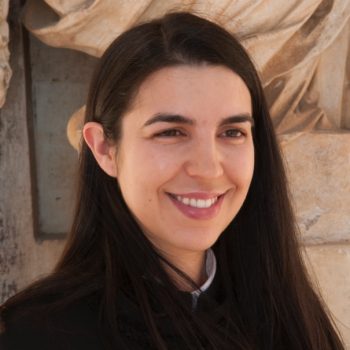 Andreia Gomes received her B.S. in Biology and her M.Sc. in Applied Biology from the University of Aveiro, Portugal. She did an internship at Hospital S. João, in the Genetics Service where she implemented and characterized a molecular method to detect aneuploidies in miscarriages and amniocentesis earlier compared to conventional cytogenetics. During her master’s, she also did a training program to bridge molecular biology and medicine at the Anatomy Institute of the Friedrich-Alexander-Universität Erlangen-Nürnberg in Germany. She joined the doctoral program of Experimental Biology and Biomedicine from the University of Coimbra and the Center for Neuroscience and Cell Biology in 2012 and developed her Ph.D. project at Lemischka-Moore’s lab at Icahn School of Medicine at Mount Sinai Hospital, in New York city. Her research interests focus on the transcriptional programming of hematopoietic stem cells from human fibroblasts and the underlying mechanism of the hemogenic program. She believes that science and technology are crucial to make the world a better place.
Beyond her investigation, Andreia is also a member of the Portuguese American Post- Graduate Society (PAPS) that establishes a link between Portugal and the United States. In addition, she also organized the Annual Forum of Portuguese Graduates Abroad that promotes the interaction and discussion among the members of the Diaspora and Portugal in the most diverse areas.