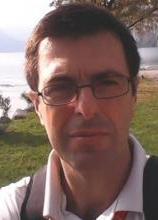 Francisco M. Couto is currently an associate professor with habilitation at Universidade de Lisboa (Faculty of Sciences) and a researcher at LASIGE. He graduated (2000) and has a master (2001) in Informatics and Computer Engineering from the IST. He concluded his doctorate (2006) in Informatics, specialization Bioinformatics, from the Universidade de Lisboa. He was an invited researcher at EBI, AFMB-CNRS, BioAlma during his doctoral studies. His main research contributions cover several key aspects of bioinformatics and knowledge management, namely in proposing and developing: various text mining solutions that explore the semantics encoded in ontologies; semantic similarity measures and tools using biomedical ontologies; and ontology and linked data matching systems.

Until February 2021, he published 2 books; was co-author of 9 chapters, 55 journal papers (44 Q1 Scimago), and 32 conference papers (10 core A and A*); and was the supervisor of 8 PhD theses and of 47 master theses. He received the Young Engineer Innovation Prize 2004 from the Portuguese Engineers Guild, and an honorable mention in 2017 and the prize in 2018 of the ULisboa/Caixa Geral de Depósitos (CGD) Scientific Prizes. In 2019, he published a book entitled Data and Text Processing for Health and Life Sciences that provides a step-by-step introduction on how shell scripting can help solve many of the data and text processing tasks that Health and Life specialists face everyday with minimal software dependencies. An adaptation of the book in Portuguese entitled Introdução à Bioinformática Via Linha de Comando was also published in 2019. The book is particularly relevant to Health and Life specialists or students that want to easily learn how to process data and text, and which in return may facilitate and inspire them to acquire deeper bioinformatics skills in the future.”