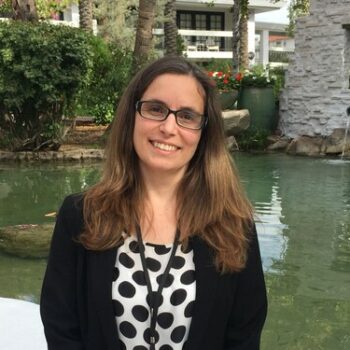 Ana M. Azevedo is assistant professor at the Department of Bioengineering of Instituto Superior Técnico (IST), University of Lisbon where she lectures courses on Separation and Purification of Biological Products, Project in Biological Engineering and Biochemical Engineering.

She graduated in 1996 in Chemical Engineering from Instituto Superior Técnico (IST) of the University of Lisbon. In 1999, she completed a MSc degree in Biochemical Engineering/Biotechnology and, in 2004, a PhD degree in Biotechnology, both at IST. In 2005, she started her post-doctoral studies and in 2008, she has hired as Research Scientist in the framework of “Ciência 2008” and afterwards “Investigador FCT”. In 2010, she became Collaborating Lecturer at Instituto Superior Técnico, in 2016, Invited Assistant Professor and in July 2018 she was hired as Assistant Professor at the Department of Bioengineering.

She is also senior investigator of the Institute of Bioengineering and Biosciences (iBB) where she coordinates several projects and PhD thesis in downstream processing. Her current research interest is integrating bioseparations and microfluidics to speed the process development of biopharmaceuticals, including monoclonal antibodies, plasmid DNA, mRNA and virus. Under the scope of these different projects, has co-authored more than 98 peer-reviewed papers with an accumulated impact factor over 340 and with more than 3400 citations. She has an h-index of 26 and has completed the supervision of 7 PhD students and 38 MSc students. She has also received 12 awards for Excellence in Teaching from the Pedagogical Council of IST.